Sweet Dreams for Every Type of Traveler 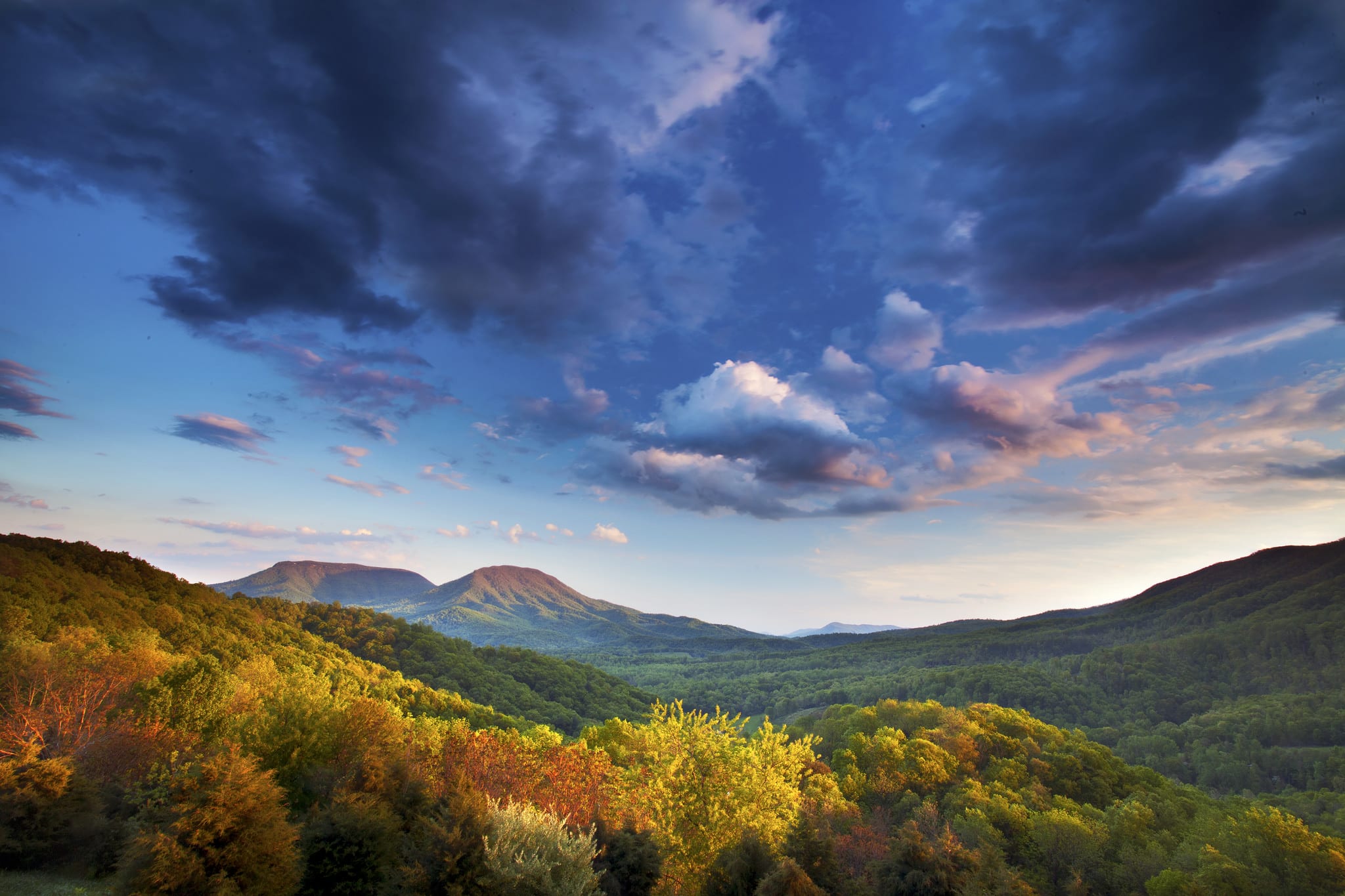 There’s much to see and do in Virginia’s Shenandoah Valley, and summer is the perfect time to set about exploring the region. There’s a nearly endless list of activities to keep couples, families, friends and solo travelers occupied – from hiking the Appalachian Trail to learning how to fly fish, and from exploring the region’s many caverns to trying some of the local beers, wines and ciders. And the choices don’t end there, as there’s also an array of lodging to choose from, running the gamut from rustic to truly luxurious.

This beautiful manor house and summer cottage are located on a working organic meat farm that raises cattle, sheep, lambs, pigs and chickens. The 400-acre farm has been in the same family for more than 200 years … which equates to eight generations! Being right on a farm means that the “breakfast” part of this B&B couldn’t be fresher, with eggs often taking center stage. In addition to the food and accommodations, which include five different room types, guests enjoy exploring the landscape, including a birding trail and a beautiful stream that runs through the property and which makes the perfect venue for a picnic lunch.

Owners Lisa and Scott Jenkins want every visit to get off to a good start, so each guest is greeted with lemonade and cookies – whether they’re staying for the weekend or just for a few minutes. The Mountain Home “Cabbin” is a hiker-friendly destination that’s just 120 yards off the Appalachian Trail, so plenty of hikers stop here to relax and share stories of their travels. The brand-new “Main House” offers private accommodation in three bedrooms. Mountain Home dates to 1847 and is on the National Register of Historic Places, with the “Cabbin” truly being an original log cabin and the “Main House” a two-story Greek Revival home. Though the home’s position near the Appalachian Trail means that many of its guests are hikers, arriving with your worldly positions bundled into a backpack is not a prerequisite for a stay here.

The Shenandoah Valley’s newest full-service hotel opened in the college town of Harrisonburg in May 2018, bringing a new level of service and a full conference facility to the region. The hotel was designed to cater to the needs of both business and leisure travelers and even four-footed friends, as the property’s pet-friendly policy has tails wagging up and down the Valley. The hotel’s 230 rooms are among the biggest in the region. As the official hotel of James Madison University, the property employs students who are exploring the hospitality industry and it hosts on-site classes for the Hart School of Hospitality. Helping the school and community is at the core of the Hotel Madison’s mission.

Located in the heart of Shenandoah National Park, right at Mile Marker 57.5 on Skyline Drive, these rustic cabins give visitors the opportunity to truly unplug – you won’t find phone or internet access here – and get in touch with nature. In short, the only tweeting that goes on here is from the local songbirds … and that suits guests just fine. The cabins are one- or two-bedroom units that do have plenty of modern amenities, from full bathrooms to electricity and heating. They each come with towels and bed linens, too, as well as outdoor grill pits and picnic tables. Guests need to bring their own cooking utensils, food and coolers (because there’s no refrigerator), so you’re roughing it a little, but not all the way. Each unit can accommodate a family of four, and some cabins are pet-friendly and accommodate up to two pets (dogs and/or cats). And that makes everyone happy. Except maybe those songbirds …

Luray: Open Arms at the Edge of Town Hostel & Inn

A hostel may not be for everyone, but Open Arms gets plenty of guests who simply love the idea of an inexpensive, shared space for living, cooking and sleeping. The hostel’s proximity to the Shenandoah National Park is certainly the driving force behind its popularity, with backpackers coming off the Skyline Drive and Appalachian Trail looking for a place to rest. Open Arms’ owner, Alison Coltrane, is a “Trail Angel” – a local who extends hospitality to hikers, cyclists and other nomads. Her huge 1940s Cape Cod-style home features a sweeping staircase on each side of the front entryway – looking like open arms – and sits on a hill just outside the town of Luray. Inside travelers find plenty of running water in the form of warm showers and washing machines, and there’s no more appealing amenity.

Visitors know Natural Bridge as the town that’s home to, well, the 215-foot limestone arch Natural Bridge, which has ties to George Washington’s early years as a surveyor and to Thomas Jefferson, who once owned it. But it’s also home to a bright red, carefully restored 1926 caboose from the C&O Railroad, which has been transformed into a cozy and fun hotel that features red cedar walls, cherry floors and a curved wood ceiling with its original cupola. It’s decorated with railroad memorabilia, including photos of caboose, as well as old signal lanterns and marker lights. The caboose itself is 200 square feet – large enough for a couple or a small family, if you don’t mind being a little close – and it includes a full bathroom; stove, microwave and refrigerator; and a large brick patio complete with a firepit. The caboose puts its guests close to the Blue Ridge Parkway, Appalachian Trail, George Washington and Thomas Jefferson national forests, the James River, and Natural Bridge State Park.

This single-unit bed and breakfast is located in a historic cottage that dates to the 1800s. It’s named for Jacob Swartz, who was a prisoner of war held by Union troops during the Civil War but released on the promise that he wouldn’t fight for the Confederacy ever again. So instead of being a soldier, he became a cobbler, supplying Confederate troops with the boots and leather goods they needed. Today that cottage still has the record books and sales logs from the store. The multi-level unit features a master bedroom and bath on the main level, along with an electric fireplace, skylights and private screened porch that overlooks the Shenandoah River. There’s also a living room, dining area, full kitchen and second-floor loft bedroom.

A very unexpected find in the beautiful mountains to the west of Winchester is Pembroke Springs Retreat, a Japanese-style bed and breakfast. This gem of the Northern Shenandoah Valley offers traditional Japanese spring-fed baths for guests at an upscale, five-room property nestled at the base of the Great North Mountain. Surprises abound at this beautiful retreat, including miles of hiking trails; tennis courts; breathtaking vistas of the Appalachian Mountains; gourmet Japanese fusion dinners on select nights; and easy access to the Tuscarora Trail, a bypass route of the Appalachian Trail.

Dating to 1828, The Blackburn Inn was envisioned and influenced by a master builder named Thomas R. Blackburn, who was a protégé of Thomas Jefferson. The Blackburn Inn was formerly part of the old Western State Hospital, but it has an entirely different feel to it these days.  With a traditional American look, the inn finds a way to merge history with modern amenities in each of its 49 guest rooms. These rooms feature such elements as vaulted ceilings and barn-style doors in oversized bathrooms, and each serves as a showplace for local and regional artwork. The inn is also home to a brand-new bistro, Second Draft, which highlights Virginia’s wines, beers, ciders and crops.

This new inn is located on MeadowCroft Farm, a working farm in rural Augusta County. It’s operated by Bill and Judie Croft, who are the seventh generation of the family that’s been running the property since the mid-1700s. The all-natural products they grow and transform into everything from heirloom pickles to jams, sauces and relishes are known throughout the region and also served at the Inn. The Crofts began restoring an 1820 hand-hewn log cabin in 2013 and five years later opened it to the public. There are six rooms here, each paying tribute to a member of the Swoope family, for whom the town is named. Breakfast is included in a stay (don’t forget to put plenty of hyper-local jam on your toast!), and the Inn also serves afternoon tea.

The Inn is a modern bed and breakfast that also offers luxury cottages and deluxe cabins. The cabins, which are limited to couples only, include a full-sized kitchen, washer and dryer, rain shower and hot tub. Some rooms in the main Inn are open to families and pets, too, ensuring that anyone who’d like to explore the Shenandoah Valley feels like they have a home away from home. Survey the guests and many will tell you that the true selling factor for them was the bountiful breakfast, which includes everything from pancakes and waffles, to omelets, to house-made granola.