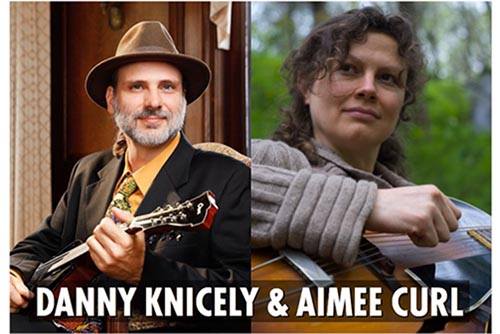 Singer/Bassist Aimee Curl, from Taylorstown, Virginia, has an unmistakable breathy sound and sultry style that combine in a musician of incredible depth. As a singer, she has a most distinctive voice with emotion and sincerity that makes even the most hardened listener soften and swoon. Aimee grew up singing in church and with her family. In her early teens, she learned the lap dulcimer and joined her first band. She met other musicians, started singing more, and began experimenting with other instruments such as guitar, fiddle, and bass. She left home and spent the next ten years playing the electric bass and touring the country with a band named ThaMuseMeant before studying at the New School of Jazz and Contemporary Music in NYC where she picked up the upright bass fiddle. Aimee returned to Virginia, and now performs with Furnace Mountain at many major festivals and venues in the U.S. and overseas.

Danny Knicely is a fourth generation Appalachian multi-instrumentalist from a Virginia family steeped in mountain music tradition. He has won many awards for both his mandolin and guitar expertise, including first place in the mandolin contest of the Telluride Bluegrass Festival. He has years of experience as a professional musician performing in many bands of varying musical styles. He has recorded and toured nationally and internationally with many groups including the award winning Magraw Gap, David Via and Corn Tornado, James Leva and Purgatory Mountain, and is a musical director for the Mountain Music Project and Footworks Percussive Dance Ensemble, featuring Mark Schatz and Eileen Carson

Ticket Prices & Info: All Tickets are General Admission $20 in advance until 3:00 PM on the day of event $25 at the door Children: 12 years and below are free when accompanied by an adult

Tickets may be purchased in advance either online or by calling the Barns of Rose Hill Box Office at 540-955-2004 (Noon to 3:00 – Tuesday through Saturday). If you call when our Box Office is closed, please leave a message and we’ll return your call within 24 business hours. All sales are final. Exceptions for special circumstances may be made no later than 24 hours prior to performance.